The Atlantic horse mackerel (lat. Trachurus trachurus) is a species of mackerel in the family Carangidae. It gets its common name from the legend that other smaller species of fish could ride on the back of it over great distances. Other common names include common scad, maasbanker, pollock, scad, saurel, rough scad.

The Atlantic horse mackerel can be found in the north-eastern Atlantic from Iceland to Senegal, including the Cape Verde islands, and also in the Mediterranean and, rarely, in the Black Sea.

This mackerel is edible and can be smoked, fried, salted and baked etc. It is an important commercial fish.

Mackerel (lat. Scomber scombrus) is a common name applied to a number of different species of fish, mostly, but not exclusively, from the family Scombridae. They may be found in all tropical and temperate seas. Most live offshore in the oceanic environment but a few, like the Spanish mackerel (Scomberomorus maculatus), enter bays and can be caught near bridges and piers. Common features of mackerel are a slim, cylindrical shape (as opposed to the tunas which are deeper bodied) and numerous finlets on the dorsal and ventral sides behind the dorsal and anal fins. The scales are extremely small, if present. A female mackerel lays about one million eggs at a time.

Shearwater, tuna, dolphins, whales, orca, seagulls, marlins, sharks, and humans may hunt mackerel. Mackerel are prized (and are highly harvested) for their meat, which is often very oily. They are known for their fighting ability, and are an important recreational and commercial fishery. The meat can spoil quickly, especially in the tropics, causing scombroid food poisoning—it must be eaten on the day of capture, unless properly refrigerated or cured. For this reason, mackerel is commonly salt-cured sushi. 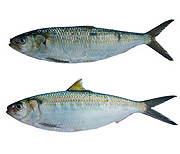 Sardinella (lat. Sardinella) is a genus of fishes in the family Clupeidae. This genus currently contains 21 recognized species.

Round Sardinella (Sardinella aurita) is a species of ray-finned fish in the genus Sardinella.

Sardines (lat. Clupea pilchardus) or pilchards, are several types of small, oily fish related to herrings, family Clupeidae. Sardines were named after the Mediterranean island of Sardinia, where they once lived near in abundance. The terms sardine and pilchard are not precise, and the usual meanings vary by region.

The United Kingdom’s Sea Fish Industry Authority, for example, classifies sardines as young pilchards. One criterion suggests fish shorter in length than 6 inches (15 cm) are sardines, and larger ones pilchards. The FAO/WHO Codex standard for canned sardines cites 21 species that may be classed as sardines; FishBase, a comprehensive database of information about fish, calls at least six species «pilchard», over a dozen just «sardine», and many more with the two basic names qualified by various adjectives.

The gilt-head (sea) bream (lat. Sparus aurata) is a fish of the bream family Sparidae found in the Mediterranean Sea and the eastern coastal regions of the North Atlantic Ocean. It commonly reaches about 35 centimetres (1.15 ft) in length, but may reach 70 centimetres (2.3 ft) and weigh up to about 17 kilograms (37 lb).

Dentex is common in the Mediterranean Sea, but also seen in the Black Sea and the Eastern Atlantic Ocean from the British Isles to Mauretania, sometimes up to Senegal and Canary Islands. It lives in sandy or stony deeps, to 200 m, and is an active predator, feeding on other fish, mollusca and cephalopods.

It is usually solitary, although younger dentex form schools and are less elusive. Adult dentex can reach a length of one metre, and weigh up to 14 kg.

Youngs dentexes have a slightly different livery, brown-blue with blue fins, than adults, which are grey-blue.

The mullets (lat. Mugil) or grey mullets are a family (Mugilidae) and order of ray-finned fish found worldwide in coastal temperate and tropical waters, and in some species in fresh water like the Shingle Fish. Mullets have served as an important source of food in Mediterranean Europe since Roman times. The family includes about 80 species in 17 genera, although half of the species are in just two genera (Liza and Mugil).

Mullets are distinguished by the presence of two separate dorsal fins, small triangular mouths, and the absence of a lateral line organ. They feed on detritus, and most species have unusually muscular stomachs and a complex pharynx to help in digestion.

The Garrick (lat. Lichia amia) is a species of marine fish in the Carangidae family, and is native to the Mediterranean and the coastal waters of western Africa to the coastal waters of eastern South Africa. These fish can reach 1.5 m in length and 18.8 kg in weight. They inhabit the coastal wave zone where they form small shoals to hunt other smaller fish.

The grunts (lat. Pristipoma) are a family, Haemulidae, of fishes in the order Perciformes. They are numerous and widespread, with about 150 species in 19 genera, found in tropical fresh, brackish and salt waters around the world. They are bottom-feeding predators, and named for their ability to produce sound by grinding their teeth.

The splendid alfonsino (lat. Beryx decadactylus) Beryx splendens, is an alfonsino of the genus Beryx, found around the world at depths of between 25 and 1,300 m. Their length is between 30 and 70 cm.

The Ariidae or ariid catfish are a family of catfish that mainly live in marine waters with many freshwater and brackish water species. They are found worldwide in tropical to warm temperate zones.

The bluefish (lat. Pomatomus saltatrix), called tailor in Australia, is a species of popular marine gamefish found in all climates. It is the sole species of the Pomatomidae family.

In South Africa, this fish is commonly known as shad on the east coast, and elf on the west coast. Shad can not be commercially sold in KwaZulu-Natal and has a closed season (currently October and November) to allow for breeding. On the west coast elf is a commercially fished species.

Other common names are blue, chopper, and anchoa.
The bluefish is a moderately proportioned fish, with a broad, forked tail. The spiny first dorsal fin is normally folded back in a groove, as are its pectoral fins. Coloration is a grayish blue-green dorsally, fading to white on the lower sides and belly. Its single row of teeth in each jaw are uniform in size, knife-edged and sharp. Bluefish commonly range in size from seven inch (18 cm) «snappers» to much larger, sometimes weighing as much as 40 pounds (18 kg), though fish heavier than twenty pounds (9 kg) are exceptional.

The Atlantic pomfret, (lat. Brama brama), is a pomfret of the family Bramidae, found in the Atlantic, Indian, and South Pacific oceans, at depths down to 1,000 m. Its length is between 40 and 100 cm.

The Atlantic bonito, Sarda sarda (lat. Sarda sarda) is a large mackerel-like fish of the family Scombridae. It is common in shallow waters of the Atlantic Ocean where it is an important commercial and game fish.

The silver hake, Atlantic hake (lat. Merluccius merluccius) or New England hake, Merluccius bilinearis, is a merluccid hake of the genus Merluccius, found in the northwest Atlantic Ocean from Maryland to the Newfoundland Banks, at depths of between 55 and 900 m. Its length is about 30 in (75 cm).

John Dory (lat. Zeus faber) also known as St Pierre or Peter’s Fish, refers to fish of the genus Zeus, especially Zeus faber, of widespread distribution. It is an edible benthic coastal marine fish with a laterally compressed olive-yellow body which has a large dark spot, and long spines on the dorsal fin. The dark spot is used to flash an ‘evil eye’ if danger approaches the John Dory. Its large eyes at the front of the head provide it with bifocal vision and depth perception, which are important for predators. The John Dory’s eye spot on the side of its body also confuses prey, which are scooped up in its big mouth.

Thunnus (lat. Thunnus) is a genus of ocean-dwelling fish in the family Scombridae, all of which are tuna, although other tuna species are found in other genera.
Their coloring, metallic blue on top and shimmering silver-white on the bottom, helps camouflage them from above and below.
They can grow to 15 feet long and weigh over 1,000 pounds. They can swim up to 50 miles per hour when pursuing prey.